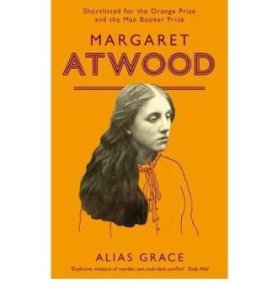 work, while looking at the rest of her list on Amazon, she seems like the kind of author I’d love, especially the dystopian fiction.

Aliace Grace is the story of Grace Marks, a convicted murderess in Canada who’s been in prison for nearly thirty years, and is telling her story to a doctor tasked by her supporters with finding the truth to help her obtain a pardon. Grace claims to have no memory of the murder itself, but everything around it is extremely detailed, so you do end up doubting her.

Throughout, I was trying to second guess this story – did Grace commit the double murder? Had she known about it? Did she remember it, whatever happened? I was trying to work it out all the way through; was she suffering some kind of multiple personality disorder, or was she hiding the truth, or was she genuinely unable to remember?

Grace is a very knowing narrator; she is aware that she’s telling a story and entertaining her audience, who she obviously wants to help her obtain a pardon and leave prison. There’s enough references to giving him what he wants in her narrative that an element of doubt runs through her self-representation.

I was fascinated to find out that people came to watch her in prison, like she was an exhibit in a museum or a zoo – she was a curiosity that people wanted to claim they had seen. There are ideas about female sexuality throughout and the role that played in her conviction, although I was slightly irritated by her attitude by the end which I thought was just a bit too coy. There’s also the question of Victorian femininity running through it; I’m quite familiar with British and American Victorian fiction but not Canadian and I was interested to read the small bits about immigration and settlers, as well as the notion that her supporters are trying to help her because they buy into the Victorian innocent girl idea, and whether she is that or is playing on that.

It didn’t quite reach compelling for me, but I was consistently interested, and wanted to get to the bottom of Grace’s story.

One thought on “Review: Alias Grace by Margaret Atwood 4/5”